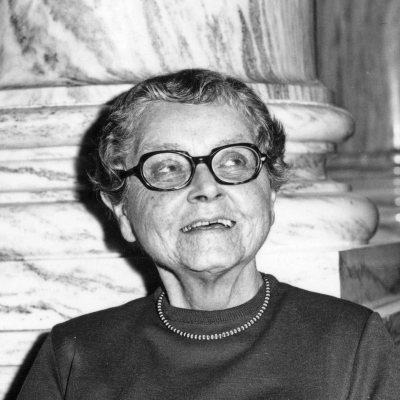 MISSOULA – Thanks to the generosity of an anonymous donor, the University of Montana has its first endowed chair in the humanities.

The new Lucile Speer Research Chair in Politics and History honors Lucile Speer and her contributions to the University and the state of Montana. Speer was a longtime librarian at UM (1928-1968) and delegate to the Montana Constitutional Convention of 1972.

The endowed position is an idea 30 years in the making. When Speer died in October 1987, a friend suggested that establishing a professorship in politics as a fitting way to honor her legacy. While the necessary funds were not raised at that time, her family, friends and colleagues did create the Lucile Speer Memorial Lecture as part of the President’s Lecture Series – a fitting recognition, given that Speer’s lifelong passion was in the area of civic and public affairs.

Lucile Speer was born on Jan. 7, 1899, in Branch County, Michigan. After earning a bachelor’s degree in English from UM, and a master’s from the University of Chicago, she taught at Kalispell High School and then began her 40-year career at UM’s library in 1928. She became documents librarian in 1938, a position she held until her retirement in 1968.

Her family was deeply involved in education in Montana. Lucile’s older brother, J.B. Speer, was UM’s registrar and business manager; her brother, O.D., served as superintendent of schools for Deer Lodge; and her sister, Lillian, was a public school teacher in Superior.

Speer was actively and passionately involved in her community and state. She was a member of the League of Women Voters of Montana and the Missoula Democratic Club, and worked on Eugene McCarthy’s campaign in 1968. At 73, she was the oldest delegate at the 1972 Montana Constitutional Convention. The convention rewrote Montana’s constitution, which had not been updated since 1889.

On campus, she was president of the University Teachers Union, as well as a member of the Faculty Senate and the chair of the Archives Committee. She was also a friend and adviser to many students and faculty, who appreciated both her sharp take on politics and the fresh corn on the cob she shared from her abundant garden near campus. She received an Honorary Doctorate of Humane Letters from UM in 1977.

The Speer Chair will recognize a faculty member who has a distinguished record of research and scholarly activity, and the inaugural chair is a shining example. 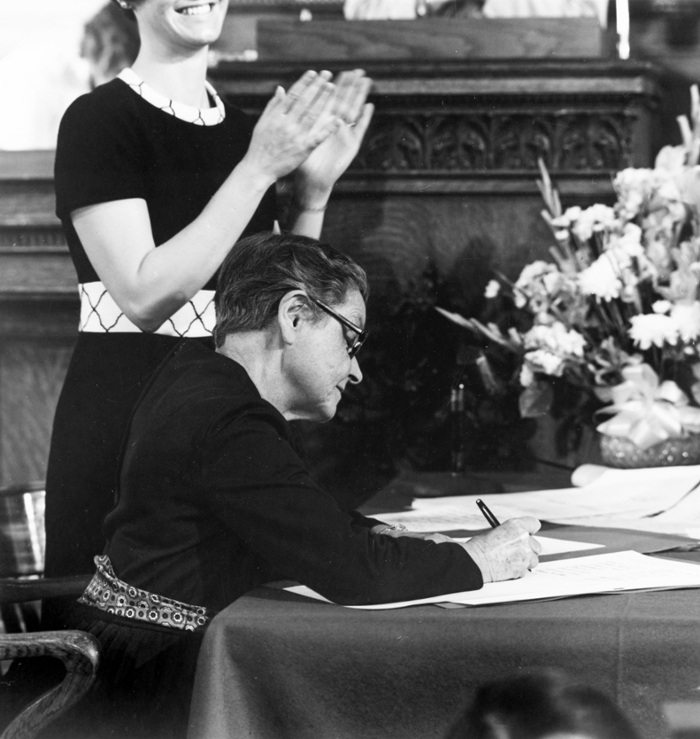 Richard Drake, who has been a UM history professor since 1982, was announced as the first Speer Chair at the Speer Memorial Lecture on April 24. Drake focuses his teaching and research on Europe and the United States. He has published five books and dozens of articles – many of which have been translated and published in Italian – as well as over 90 book reviews. For the past 30 years, he has coordinated UM’s President’s Lecture Series.

Among his scholarly work that ties Drake most closely to the endowed chair’s namesake is “The Education of an Anti-Imperialist: Robert La Follette and U.S. Expansion.” LaFollette, a Republican senator from Wisconsin, was a key architect of American Progressivism.

Drake is the recipient of multiple awards and fellowships. He received the Governor’s Humanities Medal in 2011, was named UM Distinguished Scholar of the Year in 1996 and received both the Most Inspirational Teacher award in 1991 and the Burlington Northern Award for Teaching in 1989.

“It is a great honor for me to be the inaugural holder of the Lucile Speer Research Chair in Politics and History,” Drake said. “I never met Lucile, but I have developed enormous respect for what I have learned about her splendid qualities of mind and character. Her devotion to UM and commitment to the common good inspired all who knew her. As the inaugural chair holder, I hope to acquit myself in a spirit worthy of her memory.”